Tuesday was a really great night of music at Korzo in Park Slope. This week James Carney's music series featured a new Tim Berne trio called Snake Oil, with Matt Mitchell and Ches Smith. They played Tim's music, some of it I was familiar with from his band Hard Cell, which has the same instrumentation but with Tom Rainey and Craig Taborn. Tim mentioned at the beginning that they were also planning on incorporating other people's music into the band, naming Matt Mitchell, Craig Taborn, and Django Bates as possible sources. Their set was great, I was especially blown away by how Ches Smith shaped the music, and what an intense and original approach he has to the drums. I was sitting right by the piano, and could watch Matt Mitchell play those incredibly hard piano parts that Tim writes! Matt is such a great improvisor, I feel like I learned a lot just watching his hands.
Then Mike Pride's band Bacteria 2 Boys played, which was also awesome. So much good drumming! Mike's music for this group really took me by surprise. I had always seen Mike playing drums in very out settings, but this band's music is largely tune-based. There was even one straight-up jazz ballad! 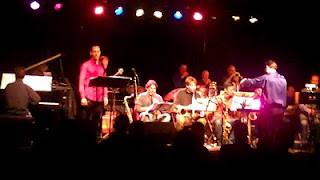 On Wednesday I saw most of a set by John Hollenbeck's Large Ensemble at Littlefield. Kate McGarry and Theo Bleckmann were singing together, which was really wonderful to see. I'm always amazed by how many different musical territories that John explores in his writing for this group. I heard him say once that he tries to approach every composition differently, using a different process, almost to try to make each piece sound like it was written by a different composer. The pieces that Kate and Theo sang on were very tonal and almost pop-sounding. Another piece had lengthy sections featuring John improvising with saxophonists Tony Malaby and Ellery Eskelin over cued atmospheric backgrounds.
Posted by Unknown at 8:24 PM