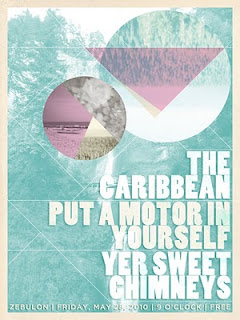 I sure am excited for this show tomorrow! Very much looking forward to hearing the Caribbean and Yer Sweet Chimneys. I met Matt Byars (of the Caribbean) at SXSW this March at a party put on by the record label Hometapes, which has some great bands on its roster. Yer Sweet Chimneys sound great, too, and have a very interesting blog that I was just perusing.
Posted by Unknown at 9:29 PM No comments:

Last Friday the Silent League played at a tribute concert to the songwriter Emitt Rhodes. The Silent League had recorded one of Emitt's songs for a compilation tribute CD, and we shared the stage with some great bands also featured on the CD, Robbers on High Street, and Grand Mal.
I was not familiar with Rhodes' music, but I took a liking to it instantly. While there's definitely a Paul McCartney-esque spirit to his music, it also reminds me of Big Star and Harry Nillson. The songwriting is very sincere and direct, and the music has a certain quirkiness. While we were rehearsing the song "Fresh as a Daisy", which was one of Rhodes' biggest hits, we had to simplify a few sections that had very irregular phrasing and odd pauses.
You can listen to the Silent League's version of "Somebody Made For Me" here. I love this song!
His career also has an interesting story. He was known as "the one-man Beatles", because he played all the instruments and sang all the parts on his records. He also recorded his first album, "Emitt Rhodes" in a studio he built in his parents' garage! He later signed a recording contract to put out an album every six months (!!) and was sued when he couldn't meet the deadline.
Posted by Unknown at 8:48 PM No comments: 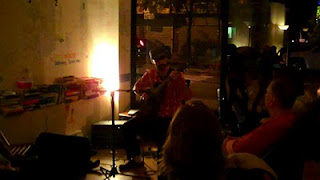 Last Friday I took part in a concert with a very unique format put together by guitarist/composer Myk Freedman. The concept was an evening of 10 minute solo performances, featuring some very wonderful musicians: Alan Sondheim, Jacob Wick, Jay Foote, Jason Vance, Jesse Gold, Kenny Warren, Josh Sinton, Mike Kammers, Owen Stewart-Robinson, and of course Myk Freedman himself. I played a structured improvisation piece that I had developed on accordion. It was the first time I've played a solo accordion performance, (besides busking in a park, once).
Playing solo is such a challenging thing, and I think it's a very valuable experience. It was fascinating for me to see how each performer approached playing a short solo piece. I think the experience has strengthened my resolve to work on solo piano playing. I think that when you play by yourself you really come face to face with how you hear music, and your relationship to your instrument.
The concert was held at a community center in Crown Heights called the Launch Pad Gallery, which was an awesome space run by some very nice people. It would be great if every neighborhood had a venue like this!
Posted by Unknown at 9:19 PM No comments: