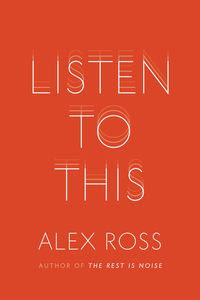 I have excitedly begun reading Alex Ross's new book "Listen to This". Ross's first book, "The Rest Is Noise", is one of my favorite books about music, he has a real gift for tracing common threads in the work of disparate artists and moments in music history. He's a bit like Leonard Bersnstein in a way, although with a more cool-headed approach. One theme of the book seems to be dissolving the borders between "classical" (a term that Ross derides) and "pop" music. There are chapters on Schubert, Bjork, Bob Dylan. Books like this are like manna from heaven for me.

Some memorable passages so far:

"What I refuse to accept is that one kind of music soothes the mind and another kind soothes the soul. It depends on whose mind, whose soul."

"All music becomes classical music in the end. Reading histories of other genres, I often get a funny sense of deja vu. The story of jazz, for example, seems to recapitulate classical history at high speed. First the youth-rebellion period: Satchmo and the Duke and Bix and Jelly Roll teach a generation to lose itself in the music. Second, the era of bourgeois pomp: the high-class swing bands parallels the Romantic orchestra. Stage 3: artists rebel against the bourgeois image, echoing the classical modernist revolution, sometimes by direct citation (Charlie Parker works the opening notes of The Rite of Spring into "Salt Peanuts"). Stage 4: free jazz marks the point at which the vanguard loses touch with the masses and becomes a self-contained avant-garde. Stage 5: a period of retrenchment. Wynton Marsalis's attempt to launch a traditionalist jazz revival parallels the neo-romantic music of many late-twentieth century composers. But this effort comes too late to restore the art to the popular mainstream."
Posted by Unknown at 5:54 AM

Labels: Alex Ross, Listen to This