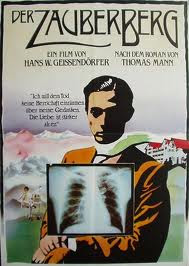 I just finished re-reading Thomas Mann's 1924 novel, the Magic Mountain. I first read it about seven years ago, and it made a huge impression on me. I would always cite it as one of my all-time favorites, although as years went by I forgot more and more about the multitudes of ideas in the book. I've only recently started re-reading my favorite books, and am finding it to be an incredibly rewarding experience. In a way, authors have it tough. We listen to our favorite songs or even albums hundreds of times, but most books are read once and put away.
Re-reading the Magic Mountain gave me a glimpse back to my life seven years ago. At certain points in the story, I could remember where I was when I first read it, and the emotions that it stirred had a familiar feeling. It is truly an epic book. I knew when I first read it that a lot was going over my head, such as the allegorical nature of the characters, and the sometimes lengthy philosophical arguments played out between them. But the beauty of Thomas Mann's writing held me in thrall, just as it did when I first read it.
I had forgotten so many things about the story! The best surprise came towards the end of the novel, when the sanatorium in which the hero, Hans Castorp, is living his hermetic existence gets a new gramophone player. The chapter is called "Fullness of Harmony", and describes Hans Castorp becoming an obsessive audiophile.
At a later point in the story, a young girl who is a patient at the sanatorium is discovered to be a clairvoyant medium, and they begin holding seances. Someone theorizes that having music playing in conducive to connecting to the spirit world, so Hans picks out his favorite records to play at the seances. Essentially making a mix tape!
Posted by Unknown at 6:26 AM