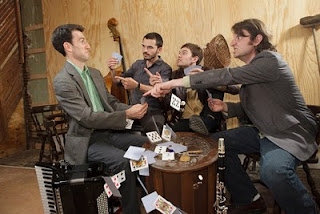 I'm hitting the road today with Old Time Musketry for a 7 city tour of the northeast! So excited to get out of New York for a bit and to bring this music to new places. Our itinerary:

6/29 Abilene Bar and Lounge
Rochester, NY
Posted by Unknown at 7:16 AM No comments:

Put a Motor In Yourself w/ DDYGG at I Beam 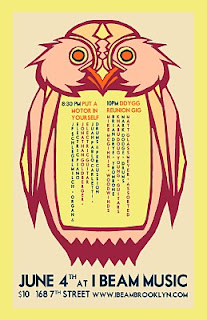 Put a Motor In Yourself continues it's recent flurry of activity tomorrow at I Beam Music in Gowanus. Also playing that night is DDYGG w/ Brian Drye, Mike McGinnis, Mark Dodge, Khabu Doug Young, and Matt Glassmeyer. This is a reunion gig for them, and will no doubt be a very special evening!
Look at this beautiful poster that Connie Wang made. Sweet!
Posted by Unknown at 9:29 AM No comments:

On Tuesday I went to Korzo in Park Slope which has been hosting James Carney's music series. First I heard Jesse Stacken's trio with Jeff Davis and Eivind Opsvik. They were playing music from their new CD, which I am very excited to hear. The first full composition that I heard developed very slowly and patiently, with a sort of minimalist repetition. The trio played with the subtlety of a chamber group, with great attention to sound and texture, and really set a hypnotic mood. The set ended with a full out rock jam, which started with Jesse repeating a single note, strumming like a guitar, filling the room with the sound of that one pulsing tone. I don't think I've ever heard a pianist do that before.
Then Kris Davis, Tony Malaby, Eivind Opsvik, and Tom Rainey played an improvised set. I was completely blown away by how well they played together. One thing I always notice with master improvisors is how the music has such an organic flow that it changes almost imperceptibly, like the way leaves change their color. You hardly notice the new directions that the music is taking until the change is already upon you. One of the highlights of the performance was a moment when Kris Davis was playing a repeated 2 note figure on the Rhodes, and Tom Rainey started playing 2 empty beer glasses on a table and THEY WERE THE EXACT SAME PITCHES! The musicians in the audience exchange astonished glances.
Posted by Unknown at 9:09 AM No comments: