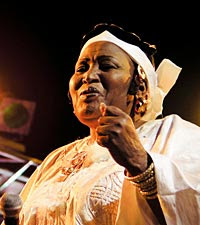 Last night I heard Khaira Arby and her amazing band at Zebulon. I hadn't heard their music before, my friend Kenny Warren of Slavic Soul Party had told me about the band after performing on the same bill with them. Seeing them play reminded me about why it's great to live in New York, where you can see a great band from Timbuktu at a small club. The band's rhythmic feel was unbelievable. The drummer was playing the kit in a way that was so different from what my western ears are conditioned to hear, and the two electric guitarists weaved interlocking strands of rhythms over the powerful groove. When they played hits together, it had an uncommon impact, I can't really describe it. It also had the energy (and volume!) of a rock band, but with an incredibly graceful finesse. At one point I commented to a friend about how great the drummer sounded, and my friend replied "everyone in the band is playing like a drummer!"
At the center of the band's sound was Khaira Arby's powerful voice. This is a musical tradition that I know nothing about, and will have to look into. Better just to hear it for yourself. I found this video on Youtube, I think this is the song they were playing when I walked into Zebulon.