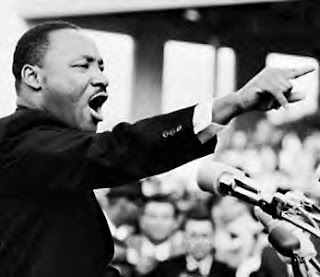 I am eagerly anticipating seeing John Hollenbeck perform his composition "The Drum Major Instinct" this Friday at I Beam. The piece is based on a sermon by Dr. Martin Luther King Jr. I heard "The Drum Major Instinct" at Symphony Space many years ago and it was an incredibly moving experience. You can listen to Dr. Martin Luther King Jr.'s speech here.

Here are some notes on the piece by Steve Smith:

"Hollenbeck makes use of a recorded sermon by Dr. Martin Luther King, Jr. in "The Drum Major Instinct." The piece is scored for two tenor trombones, bass trombone, drumset, and the taped voice of King. According to Hollenbeck, he chose trombones "because statistically they’re the most humble in a big band setting – they are the team players." He had not yet encountered the sanctified trombone choirs of Harlem, but had been impressed with trombonist Gary Valente’s "preaching" in the band of Carla Bley, leading him to feel that the instrument had the right "spiritual characteristics" for the piece. Nor had he heard drummer Max Roach’s LP Chatahoochie Red, which also makes use of a King speech. Hollenbeck sets King’s words in an entirely different way from his legendary forebear, yet both find an artistic affinity in the orator’s martial cadences.

"The Drum Major Instinct" is performed in total darkness, so that the presence of the musicians would be as invisible as that of the orator himself – necessitating memorization of the written materials. The piece begins and ends with a simple four-chord cell, and follows the rhythms of King’s heroic oratory – drawing upon its emotional power while simultaneously creating a dramatic setting for it. At times, the players follow the cadences of the speech, while elsewhere they comment freely upon it, like a congregation echoing the words of the minister. The piece builds in intensity along with the sermon, resolving into a chorale as King’s message reaches its climax. At the end, the instrumentalists follow King down the aisle of the church and shut the door behind them as they exit."

This performance is part of the Undead Music Festival, which is putting on concerts from May 9th-12th. Lots of great stuff!

Two of Anything live tracks

Here are some live tracks from the recent Two of Anything gig at Sycamore in Brooklyn. 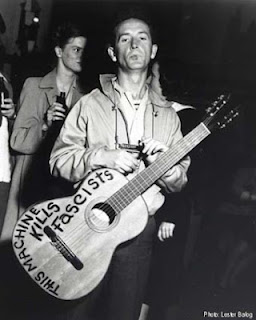 The Musicians Solidarity Council describes themselves on their website as "an autonomous group in affinity with Occupy Wall Street and the labor movement at large. We are musicians: instrumentalists, singers, DJs, audio engineers, producers, composers, performers and teachers. We are the 99%. Like many other workers, we are integral to city life, but often live in precarious conditions."

Today, May 1st, the group is planning actions against clubs in NYC that don't pay performers. The following is from the press release for the actions.

"On May 1st, a historic day for Occupy Wall Street, labor and immigrant rights movements, OWS activists from the Musicians Solidarity Council (MSC) will hold actions in several nightclubs in Manhattan's Lower East Side, highlighting the venues' practice of not paying musicians – in effect, asking performers to volunteer their talent and services to a for-profit business."

"New York City is known for its rich cultural heritage, and many popular clubs derive their success from live music. However, they rarely pay the musicians that bring draw in their customers. Instead, the bands typically "pass the hat," asking the crowd for donations; talented performers often end the night with $5-10 a person. Musicians may also be required to spend their own resources on promotion, and guarantee a minimum number of paying customers.

"Musicians are not covered by New York State regulations that protect other nightclub workers like bartenders and waiters. In fact, they are explicitly excluded."

"As rents reached record heights in the 1990s and 2000s, clubs that did compensate musicians fairly (such as Tonic in the Lower East Side) were squeezed out. A growing number of venues adopted these exploitative practices – including Rockwood Music Hall, the Living Room, Pianos, 169 Bar, and Zebulon Cafe Concert – and nonpayment of performers has since become conventional wisdom in the NYC music scene."

Ah, Tonic how I miss thee! I remember going to protests when they were being evicted to make way for the luxury condo building Blue. Goliath won that day.

I play regularly at the venues mentioned by the MSC. In the past 6 years living and performing in NYC I've come to accept that venues in this town don't pay, that nearly all gigs are "pass the hat".

I don't like it but I'm not sure what the solution is. So many musicians and performers of all kinds flock to NYC desperate to play for people, and they'll play anywhere for free. I can understand that the venue owners may have trouble seeing the point of compensating the performers when talented people are beating down their door to play at their dive bar. I don't know any of these venue owners personally, but I'm sure that the exploding NYC rents haven't made things easier for their bottom line. I wonder how well they're really doing, are they really getting rich of our "volunteered labor"?


Wouldn't it be great if all the musicians in the city joined together and decided not to perform anywhere that didn't pay us at least $50 for a gig? Hmmm, probably impossible. Hey, isn't there a musicians union? What do they do anyway? I don't know any musicians who are members.

Posted by Unknown at 5:13 AM No comments: