Staring into the abyss of time... 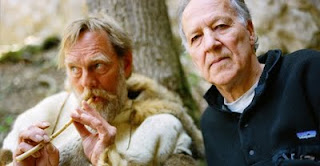 I saw Werner Herzog's new film, "Cave of Forgotten Dreams" at the IFC this week. It was pretty mind-blowing. I've never seen a 3D film before, and the effect was really magical. The paintings in the cave were so beautiful and so skillful, it was truly hard to believe that they were done by our ancestors over 30,00 years ago. Throughout the film Herzog refers to "the artists" who made the paintings, and one of the themes of the film is that the impulse to create art, to communicate our subjective experience of reality is one of the fundamental things that makes us human. It's pretty awe-inspiring to see these works of art from so long ago, it's hard to fully appreciate what 30,000 years means. Herzog says at one point in the film, "we exist inside history, they did not."
Also, there is some incredibly beautiful music by cellist and composer Ernst Reijseger that perfectly evokes something primal and mysterious, and also a kind of spirituality and reverence. The cave also contains incredible stalagmites that give it the appearance of a cathedral. Herzog's films always awaken a sense of wonder about the world we live in.
Posted by Unknown at 6:44 AM