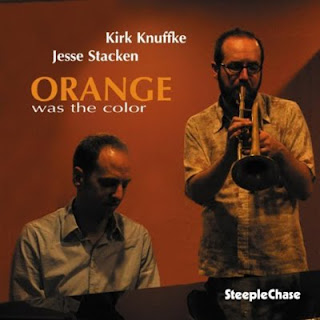 On Sunday I heard pianist Jesse Stacken and cornetist Kirk Knuffke at Cornelia St, who were celebrating the release of their latest album of duets, "Orange was the Color." The new album focuses on the music of Charles Mingus, and they picked some great tunes from the vast body of work of a master composer. Indeed, they played some of my personal favorites, like "Duke Ellington's Sound of Love", and "Peggy's Blue Skylight."
The duo didn't exclusively play the Mingus songbook on the gig, and it was interesting to see the interconnectedness of their repertoire choices. There were two Steve Lacy pieces, who was also a great admirer of Mingus, and who also recorded some Mingus tunes in his duet albums with Mal Waldron. There was also "Such Sweet Thunder" by Duke Ellington, perhaps Mingus' greatest influence. This is from one of my favorite Duke records, also called "Such Sweet Thunder". I did an arrangement of a piece called "Sonnet for Caesar" from that record for Old Time Musketry, you can listen here.


There were also pieces by Carla Bley, Misha Mengleberg, and Albert Ayler. Jesse and Kirk have a really deep rapport that can only come from years of playing together, and they kept a really nice rhythmic intensity on the swinging tunes which is not easy to do in a piano/horn duo setting! I also always enjoy seeing musicians taking on a repertoire project, hearing them interpret music that they connect with.