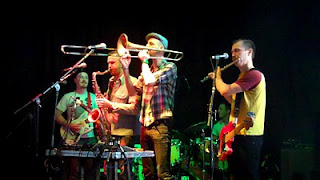 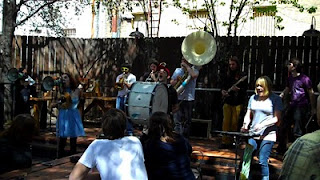 Now that my head has cleared a bit after being back in New York for a few days, I've had a chance to look through my camera and my scattered memories of the festival. Here are some of my favorite performances by bands I hadn't heard before.
The very first day in Austin I saw a band from Denmark called Slarrafenland, which means "the land of milk and honey." They were awesome! Great musicians, multi-instrumentalists, they had great vocal harmonies reminiscent of Brian Eno, and cool horn parts. Their music had a lot of sonic variety, which I am always drawn to.
Almost immediately after I saw a band called Mount Righteous which was a sort of punk/thrash/marching band thing. The singers sang through megaphones, and their performance was very joyous and strange, I loved it.
Later in the week the Silent League played at a party held by the Hometapes record label. It was a great time, despite the temperature dropping to 38 degrees! (the show was outside, mostly). The first performance was by Sharon Van Ettan, who played solo at 11am while a small but attentive audience had a pancake breakfast. Her songs were hauntingly beautiful, she has the kind of voice that stays in your memory, the feeling of it.
Yacht from Portand, Oregon also blew my mind, they brought the party more than any band I saw that week. So good! More on them in the next post...
Posted by Unknown at 10:35 PM