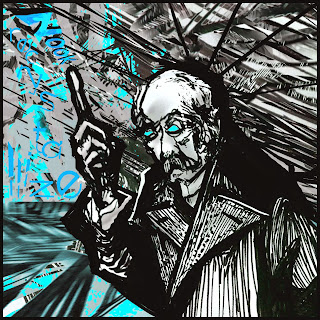 I'm happy to announce that NOOK's long-awaited second album is now available digitally on iTunes, CD Baby, and for one week only it will be available on a "name-your-price" basis on Bandcamp!

Since it's digital-only, I'm including a liner-notes-style essay about the band and album below.

Long ago, before Barnes and Noble developed an E-reader, even before Barack Obama became president, a band called NOOK roamed the earth, more specifically in Brooklyn, even more specifically rehearsing in our drummer's living room above a tire shop on 4th Ave.

NOOK was the first real band that I formed when I arrived in New York. Kenny Warren and I were inspired by seeing bands like YeahNo, AlasNoAxis and Kneebody play at Tonic we started writing music that was heavily rock-influenced, melodic, but also informed by the raw energy of improvisation. We were lucky enough to find other like-minded musicians (friends) who were willing to rehearse a lot, learn increasingly complicated arrangements, and bring the music to life. James Windsor-Wells, Jeff Ratner and Patrick Breiner are great improvisors and also have a very open concept about how different kinds of music could relate to each other.

The band recorded the album "Captain Momentum (Himself)" in 2008 in a Brooklyn basement. After that things got complicated, Patrick moved to Wisconsin and Jeff joined the band Langhorne Slim and was on the road all the time. It became difficult to maintain the "Momentum" promised by the first album.

Kenny, James and I decided to keep the band going with new musicians, saxophonist Jeremy Viner and bassist Ben Gallina. We began working on new material but hit many bumps in the road, by this point everyone in the band had gotten much busier with various other musical projects and it became increasingly difficult to play. Then Ben was diagnosed with Hodgkin's Lymphoma and had to undergo cancer treatment, including chemotherapy. We were all amazed at Ben's spirit during this difficult time, I remember how he would still make the long commute from Washington Heights to Crown Heights to rehearse. We were all so happy when he made a complete recovery.

Despite all these setbacks we finally recorded a batch of new music in 2012. The album has been in a state of limbo since then, and the band itself is no longer active, but I'm happy to see that it's finally out there in the world at least in a digital form.

Everyone in the band plays great on this record. Some of my favorite parts: Kenny's soulful delivery of every melody, as well as his amazing solo on the complex rhythms of "No Time For Science"; James' deep groove and Ben's subtle bass harmonies on the middle part of "Captain Marginal"; Jeremy's blistering solo at the end of "Nation of Bears", as well as special guest Andrew Smiley's unmistakeable frenzied guitar on the same track.

The album title I took from a passage in William James' "On the Varieties of Religious Experience". In a section of the book where he discusses how religions and spiritual beliefs necessarily change and evolve over time he wrote:

"All we know is that there are dead feelings, dead ideas, and cold beliefs, and there are hot and live ones; and when one grows hot and alive within us, everything has to re-crystallize about it."

We hope you enjoy the music!