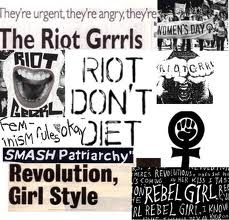 My ears perked up when I heard the BBC reporter pronounce the name "Pussy Riot" on the World Report this week. The Russian band is currently being held in custody after making an anti-Putin statement at one of their concerts at a church. Madonna has since weighed in on the band's behalf. These are some brave musicians!

Some BBC coverage. It's worth it just to hear them say the name..

Also, there are few things more badass than the tradition of all-female punk bands with names like the Slits, Bikini Kill, and of course, Hole.
Posted by Unknown at 2:34 PM