"The softest bullet ever shot..." 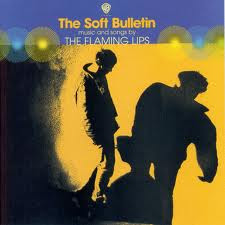 I've been having a great time watching a new documentary on Pitchfork about the Flaming Lips masterpiece album The Soft Bulletin. The album came out in 1999, and at the time my musical world revolved around rock music a lot more than it does now. Seeing these videos brought back the excitement and sense of wonder I felt hearing the music for the first time. I was lucky enough to see the Flaming Lips on the Soft Bulletin tour at a small-ish club in New Haven called Toad's Place. This concert is still one of the best of all time for me. I was totally blown away by the surreal spectacle of their show, which featured psychedelic video projection, theremin, gongs, and copious amounts of confetti thrown by Wayne Coyne.
The making of the album is a pretty interesting story. The band was about to get dropped by Warner Bros after failing to live up to the commercial hype of their hit "She Don't Use Jelly", and somehow they managed to stay on the label and make two incredibly experimental leaps into the unknown. First by recording "Zaireeka", a 4-disc concept album intended to be played on 4 separate sound sources simultaneously. Then, in the same session, recording the music on the Soft Bulletin which embraced lush MIDI orchestration instead of the Lips' trademark distorted guitar onslaught.