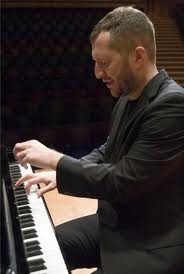 Last Thursday I saw a cool concert a Avery Fisher Hall, the NY Phil playing Mozart's G minor symphony, Mahler's "Kindertotenleider", and Thomas Ades' "Piano Concerto with Moving Image". The Ades piece was what brought me to the concert, I've been a fan of his music for a while, especially "Living Toys" and "Asyla".
I think it was one of the best music + visual art performances that I've ever seen. Apparently the composer and video artist collaborated very closely as the piece was composed. The concerto follows the story of Genesis in seven parts, for each day of creation. The images went so well with the music that at some points i felt like spontaneously applauding, or saying "yeah!" like at a jazz show. But you can't really do that at a classical concert, unfortunately.
The music was great, so colorful and inventive, and Ades was playing piano, looking completely at home in his creation.
Posted by Unknown at 8:40 PM